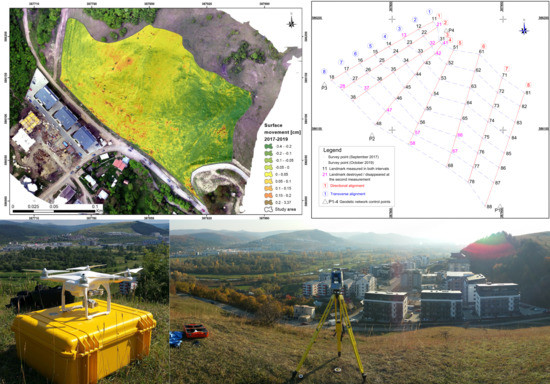 Landslides are a worldwide occurring hazard that can produce economic impact and even fatalities. The collection and monitoring of data regarding active landslides are important for predicting future landslides in that region, and is critical to minimize the losses caused. In the expanding metropolitan area of Cluj-Napoca, Romania, drastic changes of land use and increasement of construction zones represent a current evolution issue. The urban sprawl phenomenon imposed the expansion of the city limits and outside the old built-up area, and due to the hilly terrain and geomorphology, natural hazards such as landslides and erosion processes are susceptible to appearance or reactivation. The study incorporates interdisciplinary research composed of evaluation of a landslide susceptible hotspot located in an area of interest to the municipality by means of geodetic and topographic precise measurements, combined with the use of unmanned aerial vehicles (UAV) monitoring of surface movement and GIS spatial analysis. The data obtained in a span of over two years reveal that the investigated slope is subjected to a shallow active landslide of a few centimeters per year, and based on the 64 individual placed landmarks the highest displacement value was 67 mm. Through geomatic tools the exchange rate of the slope surface was evaluated with comprehensive volume calculations, such as displacement, erosion, and accumulation that illustrate a volume of material displaced of 107.2 m3 and the accumulated one of 55.7 m3. The results provide valuable insight into the complex landslide and erosion dynamics that are crucial when predicting future movements and prevention measures. View Full-Text
Keywords: topography; GNSS; total station; fly survey; GIS spatial analysis; geomatics; surface erosion